Don't Let Daughters Grow Up to be Demons

I made a LO for the "Bring on the Darkness" challenge sponsored by the monthly scrapbooking kit that I subscribe to, Scraps of Darkness.  The kits are always amazing.  It's like having my own personal shopper.  By the Kit Club's name, yes, Halloween is a big day on the site.  Here is my entry: 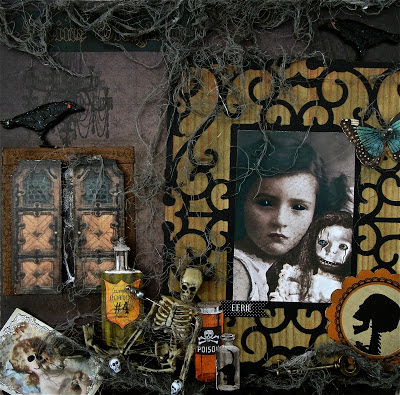 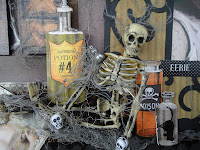 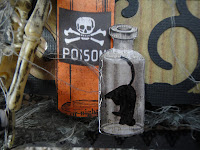 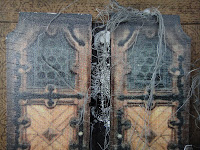 Here is the photoshopping process:  The original image came from The Graphics Fairy Blog.  She collects amazing images and shares.  I gave the girl demon black eyes, cracked skin that is actually a photo of dried mud and took away her greenery and gave her a scary doll instead.  The doll is made up of three other dolls that I found online.  I added fish teeth and one human eye to the doll to up the creep factor.  How'd I do? 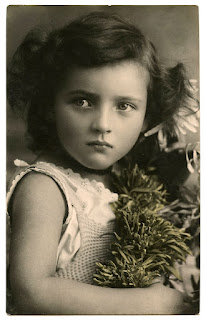 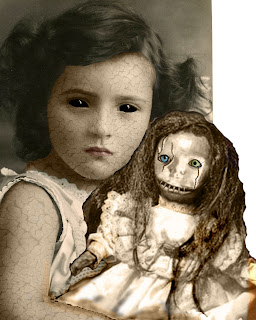 Posted by Lee aka Violent Kittie at 4:38 PM 1 comment:


Here are the rules for Punky Scraps Challenge #55!  Use everything listed! 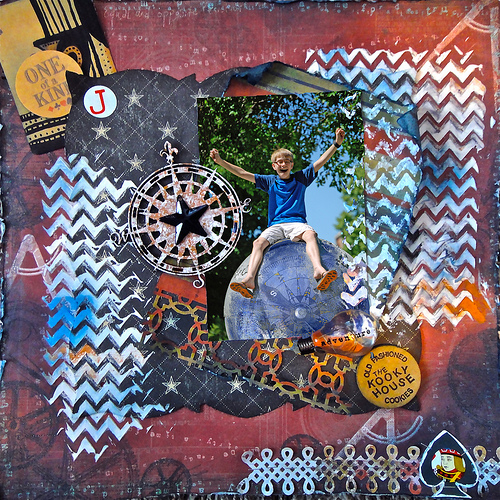 I used every challenge item on this LO.  The middle paper layer was punched with a Lucky 8 punch and the others are Martha Stewart. The punched strip along the bottom has been stapled on with tiny staples.  I combined the masking and the chevrons.  I used three patterned papers and one photo. This was a great challenge! 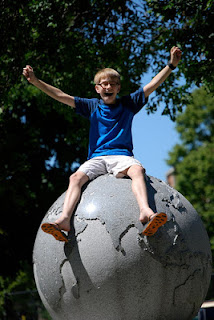 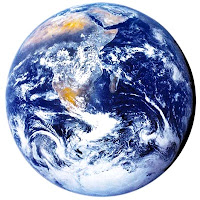 I photoshopped the globe with these layers of the Earth and this compass from the Mr. Whisker's Air Pirate Digital Kit.

Most of the paper elements came from the September Scraps of Darkness Kit, "My Guy."  The chipboard compass is from Dutsy Attic.  The star on the compass came from Bath and Body Works.  ;)

Thanks for stopping by, I appreciate it very much!

Posted by Lee aka Violent Kittie at 10:39 AM No comments:

A few months ago, I won a spot on the Punky Scraps' Design Team.  It's another web based challenge site, and there are two challenges a month.  Stop by the site and check us out.

Here is the photo that I was supposed to draw my inspiration from:

Between the makeup and the little ribbons, it reminded me of the point in life where my daughter is now.  She's shedding the last bit of childhood, turning into  a lovely young woman.  But she still plays and does silly things.  The picture is from her shooting a "music video" that she took of herself with an app called "Video Star."  It has every video trick that we saw on MTV in the early 80s. 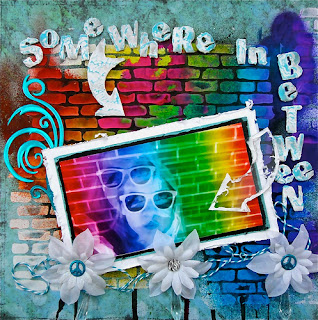 "Somewhere in Between" Punky Scraps Challenge 54
For the flower centers I used peace sign and zebra brads.  I had picked them up to do a LO about my daughter, and this was the first chance that I have had to use them.

Thanks for stopping by!

Posted by Lee aka Violent Kittie at 9:58 PM 1 comment:

October at The Paper Mixing Bowl

It seems to have been a long month for me!  But I should be putting up more on my blog in the near future.  I seem to be keeping up with school, life, scrappy things and even had the time to catch a cold.  I'm a great multitasker!  Here is the October Recipe Card for October's Paper Mixing Bowl Challenge. 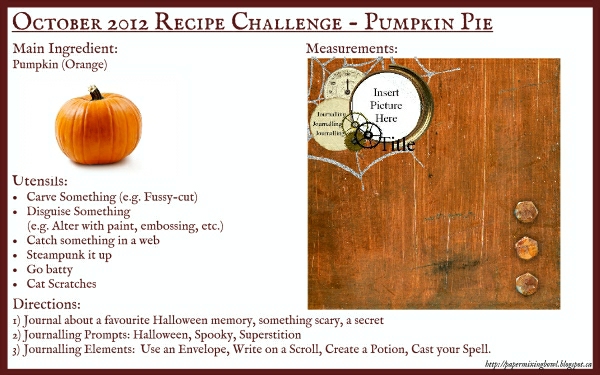 Here's my take on the recipe.  I didn't use much orange.  One of the gears is orange, so orange is included. 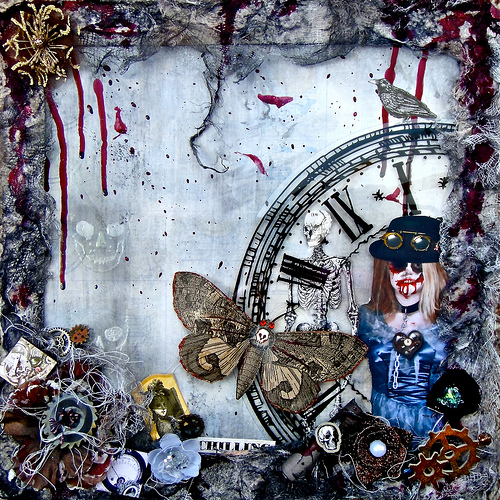 I did fussy cut the skeleton, my pretty little zombie and my version of the deaths head moth.  Thanks to "Reneabouquets" at my kit club for showing her glittered edges.  I used this on my moth to give the wings a bit of emphasis.  I used embossing powder on the wings.  The moth it's self covers two utensils, it was fussy cut and disguised with paint and embossing powder.  I caught the whole lay out in a web, with the inked and tattered gauze.

I tried to stamp on some bats, but wound up painting them out.  They just didn't look right. 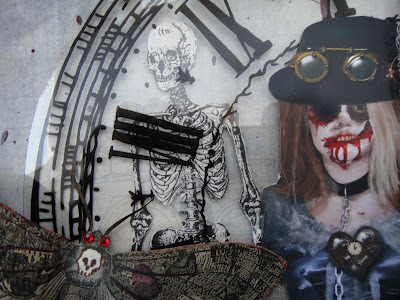 Here is a closer look at my zombie.  The husband said that my zombie looked fake.  I told him that I worked hard on my zombie!  I even steampunked her up a bit for this challenge.  Yes, that is a drop of ink on the wing of the moth.  I forgot to photoshop that one out of the picture. 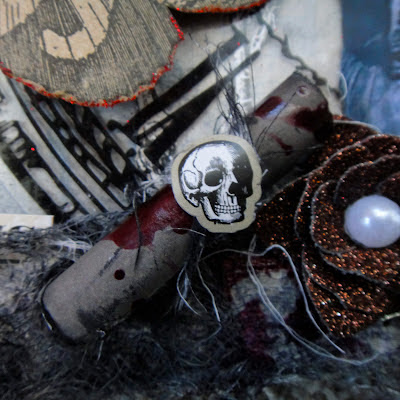 The little skull sticker conceals my journaling.  I journaled my Halloween secret in a scroll.  The scroll is the next picture down. I cut up rub-on words and some stickers to do the journaling.  I wanted to give it that Ransom note effect. 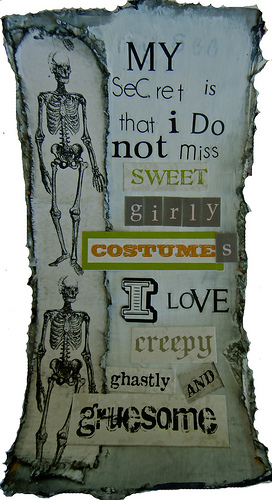 Thanks for taking a look! Stop by The Paper Mixing Bowl and play along!  Have a great Halloween!

Posted by Lee aka Violent Kittie at 9:21 AM 5 comments: 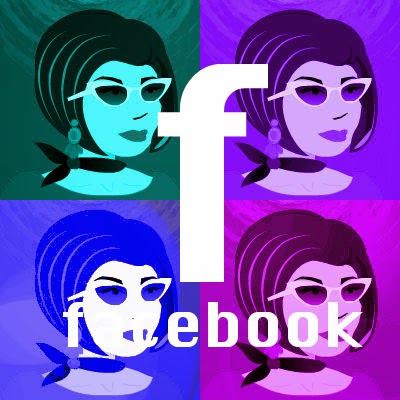 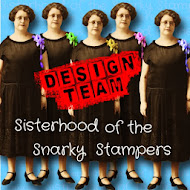 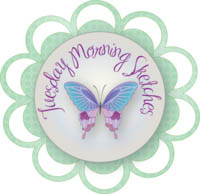 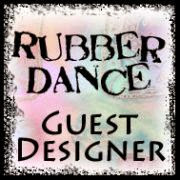 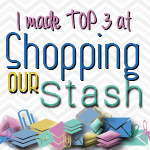 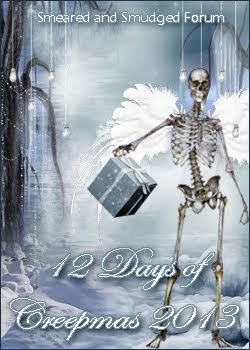